R&B/Pop recording artist Kelly Rowland was only 11 years old when she made her foray into the music industry and as a teen became a member of Destiny’s Child, a group that starred a still-budding young singing sensation named Beyoncé Knowles.

Two decades later, Rowland is still topping the charts as a solo artist. Her single “Motivation” recently reached No. 1 on the Hot R&B/Hip-Hop Songs charts, and Rowland is set to release more singles from her third solo album, “Here I Am,” internationally.

Still, though she’s a veteran performer, Rowland concedes that it took years for her to start looking outside the music industry for business opportunities that would allow her to leverage her fame to score endorsements and other money-making ventures. As one of the newest judges on former American Idol judge Simon Cowell’s U.K.-based show, “The X-factor,” Rowland plans to build her brand even bigger in Europe and other parts of the world as both an artist and a TV personality.

Rowland, 30,  is one of the growing number of recording artists pushing to diversify beyond selling music in an industry where sales continue to dwindle. Rowland is still considered a top-selling artist in the R&B world, but sales in the genre hardly compare to the sales during the 1990s, when albums from Destiny’s Child and other top pop acts were almost guaranteed to reach platinum status. She is looking for ventures that can help her pull in at least as much revenue as was common before the digital era changed the music industry forever.

She says she’s had to market herself much differently from how Destiny’s Child did in the 1990s. “You were everywhere in one day. I remember being in three different countries in one day,” she said.

Today, social media has transformed the whole process, she said.

“The things that you’re able to take advantage of now digitally, I wasn’t able to do then. Even with social networking, it gives you a chance to talk to your fans directly,” she said. “Every day there’s a new message or a new site or some sort of way to break out and speak to your fans and talk to them and be connected to them, one-on-one.”

The strategy for Rowland’s album has centered mainly on the social media world and what her record label calls, “lifestyle marketing.” That includes a viral video campaign that pushed the views of her “Motivation” video to more than 26 million on Vevo and working with nontraditional retail partners to sell her album in 24-hour pharmacies and department stores. 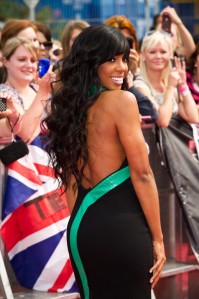 But even though more money flowed into the music industry in the 1990s, Rowland didn’t always capitalize on opportunities like she does now, and she didn’t have nearly as much control over the direction of her career.

“Before, I was so indecisive and young. Now, I’m more hands-on with things. If I was going to do anything different, it would probably be to be more hands on. And actually say ‘no,’ because we would say ‘yes’ to everything,” Rowland said.

Now, a new generation of young performers such as Justin Bieber and Selena Gomez have come into the industry under the new model, under which record companies often take a percentage of the money artists get from endorsement deals, appearances and other ventures in exchange for aggressively marketing the artists and lining up new deals. As these younger artists pursue similar commercial opportunities, Rowland has advice for them: “Pay attention to everything. You look at everything. You sign everything. You look over every contract,” she said.

She’s applying that advice to her new foray into television.

She plans to use her “X-Factor” appearances in the fall to push the album to fans in Europe, Asia and Australia, leading with a new single, “Down For Whatever.”

I have found nothing but kind words describing Kelly from her co-workers and the longtime fans of the show.  The British audience seems to have taken to her and I like her chemistry with the other judges. My only quip with her is to tone down the “sassyness” a bit.  Maybe I’m just being picky.  But she has years of quality experience and can give a ton of advice to the contestants and the audience can appreciate that.

4 thoughts on “Wall Street Journal: How Kelly Rowland Is Expanding Her Brand”